As I regularly get asked about it, I thought it would be good to pull together some details and links which I have found interesting and or useful.

Throughout my education I have always had difficulties reading, but it was always disputed I had any form of dyslexia.  I was eventually assessed as dyslexic at age 45, this was a full physcological assessment from The Dyslexia Institute.  On the Turner Index, a scale of A to F where A is no dyslexia and F is severe dyslexia, I was assessed at level C described as mild dyslexia. I have sought to find ways to make reading easier.  This has lead me to look into ‘Visual Stress’ and how this can be assessed and managed.

I first went for a Visual Stress Assessment at Glasgow Caledonian University.  This resulted in me being prescribed reddish orange lenses. 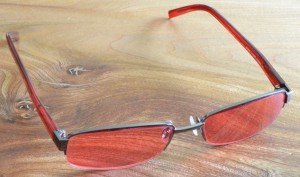 These helped sometimes, but made things worse sometimes.  The lenses were manufactured by Cerium Visual Technologies who I discovered have a fair amount of information about Visual Stress on their website.  I then heard about the work of Ian Jordan, an optician specialising in various conditions, including dyslexia.

After being for an eye test and assessment at Jordan’s I was prescribed blue lenses and have found these much more successful compared with the reddish orange. 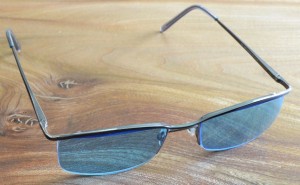 There are some interesting YouTube videos giving much more information.  The quality of the video is poor, but they are worth putting up with for the content.  As a footnote, it’s also worth saying I suffer from far fewer migraine headaches nowadays since using the blue lenses.

However, although the headaches have reduced significantly, they haven’t ceased, and I was still getting fairly regular headaches which seemed to be vision related.  On my return visit to Jordan’s for a routine check after having had the blue glasses for two years, Ian Jordan thought something still wasn’t right if I was still getting regular vision related headaches.  So after various further tests, he tested my eyes independently for colour and found they were indeed different.  My latest glasses are asymmetrical, one lens being blue and the other yellow.  I’ve been getting asked about the latest frames, they are by Ronit Furst. 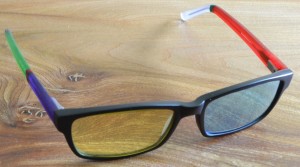 People ask, what does this do?  Well it somehow reduces the visual stress by neutralising some unwanted 3D effects.  It’s a little like 3D glasses for the cinema in reverse, and it’s called the Pulfrich effect.  Having now been wearing these for several months, I very rarely use normal clear glasses, as I much prefer these, which have been a surprisingly significant improvement over the previous blue glasses.  Although not completely gone, the migraine headaches have now become the exception, rather than the norm.